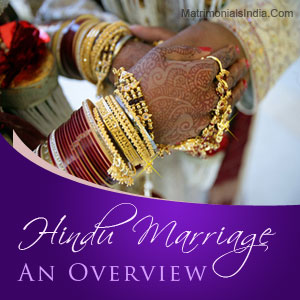 According to the Hindu religion, marriages are considered a sacred affair. Marriages are not just about a lifelong affair, it is a relationship that is supposed to last for the next seven lives. Hindu marriages are a long drawn affair, where there are a dozen (& sometimes more) auspicious rituals & ceremonies which have to be followed. And, it is not only the bride and groom who have to be there, the whole troupe of family members & close relatives have to take part & shower their blessings on the happy couple.

Within Hindu Marriages too, there are a lot of variations depending upon the state and ethnicity of the couple. Though there may be some unique customs & rituals specific to certain regions, there are some common ceremonies & rituals which are universally followed.

Already registered? Sign In
Some Common Rituals And Ceremonies followed in Hindu Marriages :

The couple takes seven rounds around the holy fire (called the Saat Pheras). Each of the pheras stand for different vows, seven in total. The ceremonies mentioned above are just a few of the ones actually followed. There are many other small & big rituals (which are considered essential) in order for the Hindu marriage to be considered complete.