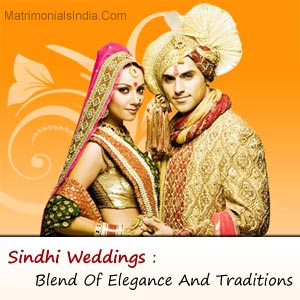 India is an amalgamation of cultures. Each community in India has its own traditions and formalities that make it distinct. The Sindhi people are one such prominent community in India. The marriage ceremonies in the Sindhi culture are beautiful and meaningful. Their weddings are a blend of Hindu and Sufi traditions and usually take place on auspicious days like Satyanarayan Chandsi or the new moon day. There are number of interesting ceremonies and rituals that are observed with dedication. The various rituals and ceremonies in a typical Sindhi wedding include :

Already registered? Sign In
These rituals and ceremonies have deep seated meanings and significances. They help the couple make the transition into the new life. This way two people come together as one and enter into a relationship of bliss and happiness.