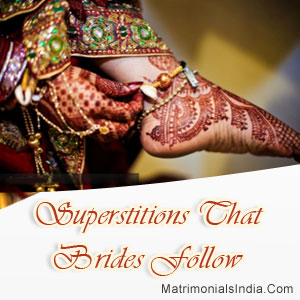 The wedding day is a special day for the couple who is about to enter into a lifelong relationship with each other. Though it is an important day for both the partners, for the bride it is D-Day of her life. Although many people may take this as a sexist comment, it is just that girls are more sentimental about marriages as compared to guys. As such, there are many superstitions with respect to a bride. Some of these superstitions are linked to the health of the couple, some to the success of their marital life and soon.

Already registered? Sign In
Brides & Some Common Superstitions :
These are some of the popular superstitions associated with the bride & her wedding day. Though most people think of it as nonsense, many of these superstitions actually have deeper meanings associated with them. But that does not mean that they should be taken at face value or not following them will cause trouble. In the end, what matters most is that the bride & groom are happy.