Why Ring on The Ring Finger 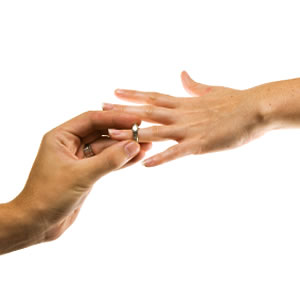 The most frequently popped up questions in the mind of groom-to-be, bride-to be, lovers and teenagers are "Why ring on the ring finger?" or "What is the significance of wearing ring on the ring finger?". Many excerpts from the past state that there is a very sensitive vein of blood, called vena amoris, which connects ring finger to the heart, which is the symbol of love. Because of this belief the particular finger is used for the engagement or wedding ring and hence the name "ring finger" has been given to it.

On the other hand, it is also believed that ring finger is also known as the medical finger, the reason being the same i.e. the blood vessel or vein that goes to the heart from this particular finger. In this context, the great writer and philosopher, Macrobius stated that thumb constitute that part of palm which always remains apart from other fingers whereas forefinger and little finger are not fully protected, the middle finger is too disgracing to be given such a honor. Therefore the only finger left is the wedding finger. Different countries have different traditions of wearing the wedding ring, details of few of which is given below :

Lastly, wearing ring on the ring finger signifies pure matrimonial intentions. Wearing a wedding ring or engagement ring on ring finger symbolizes unconditional and unbreakable love, affection and attachment between two souls or hearts. We hope that you might have received a satisfactory answer to your curious question.

Why Ring on The Ring Finger