Significance of Henna or Mehendi 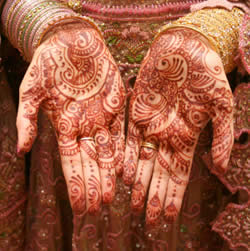 Henna is a widely known decorative material used to beautify hands and feet. It is also known by the names of Mehndi and Mylanchi. Fetched from a bush known as Lawsonia Inermis, Henna leaves are dehydrated and crushed to form henna powder. Then water is added to form a thick Henna paste. In ancient era the Henna paste was used to provide comfort in the diseases related to the blood circulation and various other pains. Today, Henna has got an entirely different usage and significance. Nowadays, Henna is used for beautifying hands, legs and dyeing of hairs all across the world and especially in Indian Subcontinent. Plastic or paper cones are used for beautifying hands and feet, and small brushes are put to use when it comes to dying hairs.

Already registered? Sign In
Application of henna on the hands and feet of bride, one night before the wedding ceremony is the most common usage but traditions vary country to country; a brief of which is given below :

Henna got a big exposure from Bollywood movies as well. Indian movies reflect an epitome of Indian weddings, customs and rituals; has promoted usage of Henna at worldwide level. Due to the exposure from Bollywood movies, the usages of Henna got a never before exposure at the international level. Though henna most commonly used for beautifying hands and feet but the difference is seen in the designs and patterns that may vary from culture to culture, few of which you will find below :

Custom of Henna in Indian weddings
Though henna is used in various ways and on numerous occasions but the most unique and common usage no doubt is with context to Indian weddings.

In India the "Ritual of Mehndi" is celebrated by the bride's family. The ritual is held one night before the wedding. It is looked at in the form of party or family gathering to enjoy the moments, wherein Henna is applied to the bride's hands and feet. Contrary to the earlier times, now even many of the female family members and friends of the bride are keen for applying Henna on their hands and feet. Engraving initials of groom's first name on bride's hands is also becoming very common. Once the Henna designs and patterns are created, the skin is kept untouched for about a night time and the bride does not do any household work until the Mehndi completely dries up. After all the designing of Henna is done, the Mehndi night is enjoyed with traditional music, dance and dinner. Later the skin is washed with lukewarm water.

The fragrance and color of the Henna remains on the skin for some days or for some weeks depending on the quality of the Henna paste used. The final color comes out to be reddish brown and the patterns on the skin looks absolutely gorgeous. Lastly, the basis forming part of this tradition is the belief that the bride will get even more love and affection from her in-laws according to the longevity of duration that the color lasts. Longer the duration more will be love getting showered upon the bride. Though just a belief, but all the necessary care is taken by the bride's family to ensure that the henna paste is of optimum quality, which will further ensure that the henna color does not get off that easily. Many other ingredients like Amla, Shikakai etc are incorporated in order to achieve the desired results.